Thanks to the team at DNX (an award winning marketing agency also based in Albury) we now have a new corporate logo and website http://www.alburyvineyard.com/.

As well as providing information about the vineyard and the wines we hope to produce, the web site also gives some background to organic viticulture and wine making in the UK. There is also a link to this blog.

Please let me have any comments... 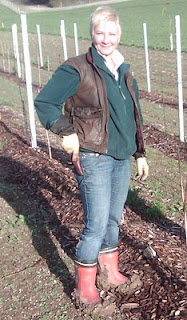 I'm delighted that Alex Valsecchi has joined the team as Vineyard Manager.

Until recently Alex was at at RHS Wisley responsible for the Orchard, Nursery, Model Fruit Area and the Vineyard. Alex has extensive experience in Vineyard Management having created the vineyard at Wisley following several years practical experience working on vineyards in New Zealand.

Alex will be responsible for all aspects...

Back in May when we planted the vines we decided to dip the roots in a product called Rootgrow, which is a mycorrihzal fungi from a company called PlantWorks. Mycorrhizal fungi normally occurs naturally in soil. It breaks down organic matter releasing nutrients particularly phosphates and can significantly increase root capacity. Unfortunately herbicides and modern farming... 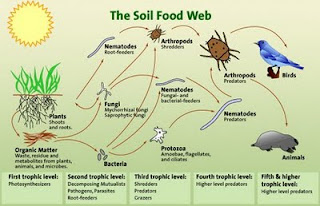 The Soil Food Web is a diverse community of microscopic organism which live in the soil. There are hundreds of thousands of species and this biology is an integral part of a healthy ecosystem. These soil dwellers are performing important tasks that allow plants to thrive and grow. As they eat, grow... 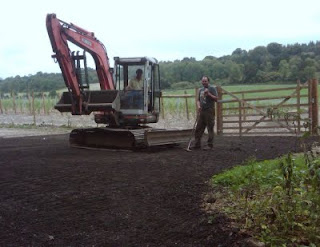 Philip and Gary have created an excellent new hard standing to the entrance of the Vineyard. Hopefully this will mean that tractor wheels will be washed when leaving the vineyard so that we don't deposit large pieces of mud all over the A25. We will see! 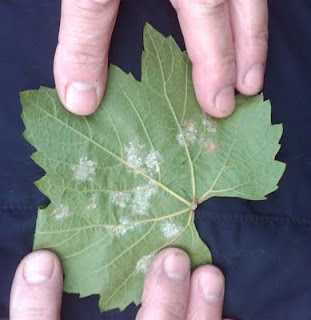 The main diseases that can effect vines during the growing season are Powdery Mildew, Downy Mildew and Botrytis. Downy Mildew has unfortunately arrived at Albury!

Downy Mildew is a white down that appears on the underside of the leaves causing them to wither and die, the fruit can also be attacked. The standard treatment in an organic vineyard is a copper solution.

As the name suggests...

My first Bunch of Grapes! 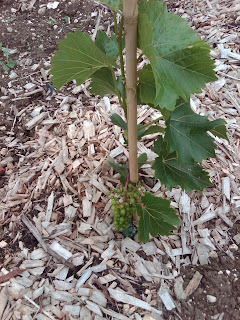 Maybe not the best bunch of grapes you've ever seen but they are the first from Albury Vineyard and are therefore "special". Having said that, they are of course of absolutely no use for wine production and are destined for the compost heap along with any other bunches that appear this year (and probably next for that matter).

The first grapes that will be used for wine production will be picked...

The Battle of the Weeds is Won...for now! 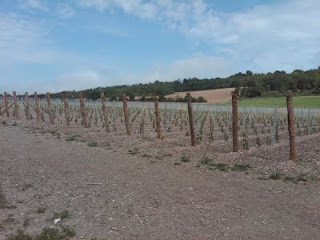 Weeds are one of the biggest problems for an organic vineyard, especially when new vines are trying to get established. Its amazing how mother nature so quickly takes over with all sorts of vegetation if the land is not managed. In my case the major offenders include Rape, Charlock and Thistle.

Thanks to the efforts of Ivan and the team, Philip, Ken, Michaela her team, my brother Paul, JB, and my... 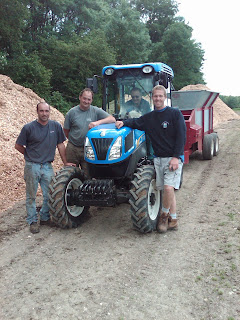 Gary, Philip, John (in the cab) and Darryl (from Laverstoke Park) with the spreader and the mountain of wood chip

Weeds are a big problem for organic vineyards, especially when the vines are trying to get established. After much debate we have settled on a mulch to control the weeds, comprising a mixture of green waste compost from Laverstoke Park and virgin wood chip from LC Energy. Last week we...

The new love of my life! Slim, sleek and a right little goer...... yes the tractor!

On Friday my new tractor arrived all the way from Italy. Now that I'm on the wrong side of 50, I have discovered that a new tractor is more exciting than a sports car and almost certainly safer (and cheaper) than a new woman!

The tractor is a New Holland and is specially designed for...

Green Shoots - No, not the economy! 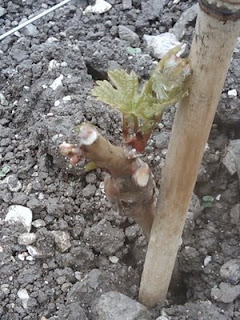 The vines have only been planted two weeks and already they are bursting into life! 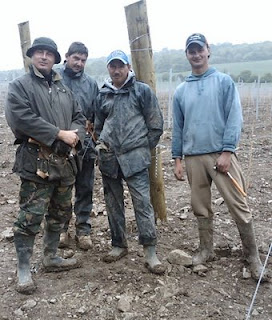 Ivan (left) and the team
The trellising is now nearing completion thanks to Mike Terry, Ivan and the team. It will have taken about ten days to install the 120 wooden end posts, 1,700 interim posts, 8,500 bamboo canes and more than 10,000 metres of wire to support the vines as they grow.
In spite of some difficult ragstone at the southern end of the vineyard, the work will be completed on time...