Preparing the Vineyard for Winter 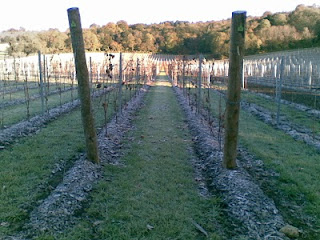 Autumn Frost in the Vineyard
The first frosts have already arrived and we are now preparing the vineyard for winter.

November is normally a quiet time on the vineyard as the main job in the winter is pruning, which doesn't start until December or January when the leaves have all fallen and the wood has ripened.

Having said that, Alex has been busy sowing grass seed between the rows of the newly planted vines and she is now tackling the weeds that have beaten the mulch. Chickory is a real problem some of which has survived from a ground cover the year before the vines were planted (please note JB!!). Unfortunately the woodchip we used this year was too fine and is not as good as the batch we used on the first block which is still working well.  On top of that the pheasant seem to enjoy spreading the woodchip about the place which has left the mulch very sparse on some rows. We will probably have to spread another 800 cubic metres of woodchip next Spring to win the battle of the weeds next year. 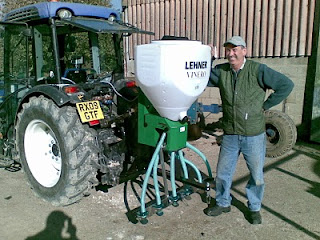 David Seyall with the grass seeder

In the next few weeks we are expecting delivery of a weather station which will monitor temperature, relative humidity, radiation and rainfall all of which will be viewable on an internet site. One of it's primary purposes will be to give us early warning of a frost in April/May after bud burst. Threshold values for temperature can be set which when triggered send a text message to a mobile phone - probably in the middle of the night!

Other tasks this winter will be to replace broken bamboo canes, complete the trellising and assess how many vines we will need to order to replace any that have died. Most importantly we also need to complete our strategy for minimising the risk of frost damage next Spring.
Tweet Share Pin It Add Email