The Science of Viticulture 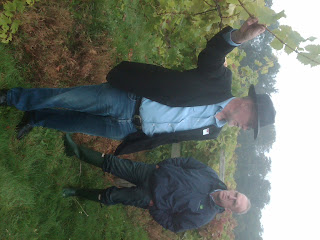 Peter Hayes lecturing at Brightwell Vineyard, Wallingford
On Monday I attended a Wine Skills Masterclass given by Peter Hayes. Peter is an expert in grape growing and vineyard management having spent more than 30 years in the Australian wine industry, including Director of Viticulture at Rosemount Estates.

We spent the day learning about numerous vine management techniques including canopy... 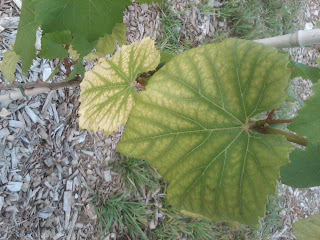 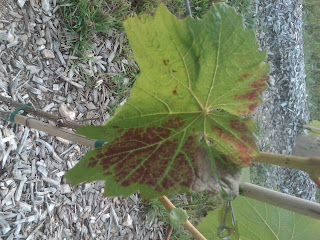 Pinot Noir with Magnesium deficiency
It is essential to analyse the soil and vine tissue to understand the availability of nutrients in the soil. Even though we are organic, and never use herbicides or pesticides, it is sometimes necessary to apply nutrients to the soil and the vines to address any significant deficiencies.
Agronomyis the application of various soil...

ITV arrive at the Vineyard 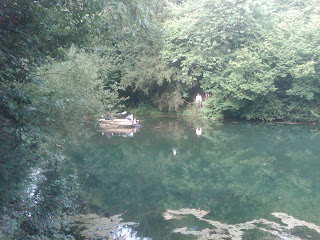 ITV filming at the Silent Pool
Earlier this week an ITV film crew arrived at the vineyard but sadly only to use it as a car park! They were there to film a new drama series called The Oakes which will appear on our screens early next year. The plot involves a girl who drowns in a lake. The Silent Pool is a local beauty spot adjacent to the vineyard where they filmed the drowning.
Filming started at... 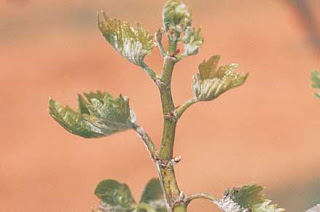 Dormant buds can be infected and... 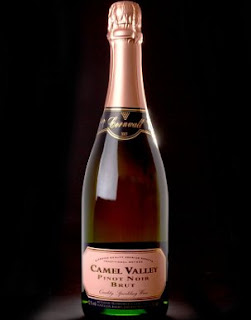 Camel Valley in Cornwall have won a prestigious IWC trophy for best in class in the Sparkling Rose category, beating off 450 other entries including many champagne houses.

This is great news for English bubbly. Hopefully Albury Organic Vineyard will win an award soon after our first vintage becomes available in 2014!

For the full article in the Daily Telegraph follow the following link:

The Vineyard in Summer 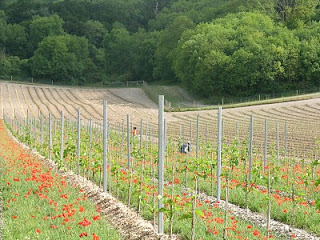 Now that summer has arrived the vineyard is looking a real picture. The vines are recovering from the severe frost in May and the whole area is covered with poppies. Whilst pretty, the poppies will have to be cut soon before they seed and invade the woodchip mulch.

It looks like the cold winter and May frost will have killed around 150 vines. Nearly 100 are Pinot Meunier which have already been...

Battling Weeds with Fungi and Woodchip 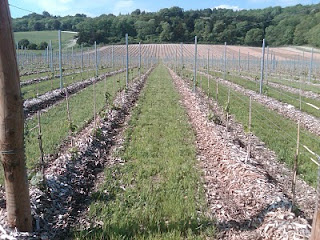 Weeds are one of the biggest challenges for an organic vineyard. Without the use of herbicides weeds can quickly take over and compete with the vines, which is especially bad news for new vines trying to get established.

Agricultural soils which have been ploughed for many years often end up being dominated by bacteria rather than fungi. There is a correlation between plants and their preference... 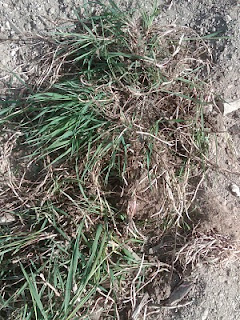 The dreaded couch grass has appeared on the perimeter of the vineyard. Couch grass is a noxious weed whose spiked flowers somewhat resemble an ear of wheat in structure. It is a perennial grass and the rhizome spreads rapidly in all directions in light soil, sending up leafy stems from the nodes.

Couch can be a nightmare for organic growers as we can't use herbicides and the only real way of... 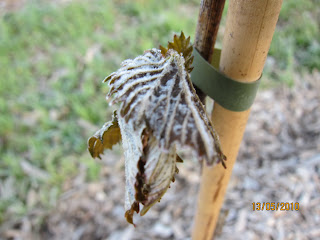 For the second night running the vineyard has suffered a fairly severe frost causing damage to buds and leaves on the vines. Were not sure how much damage has been done but it will become apparent during the next few days as leaves will appear burnt and buds will shrivel and fall off where the frost has attacked them. 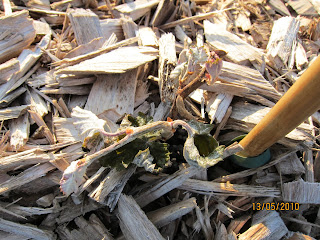 New shoots will appear in a few weeks time but they won't be as vigerous or... 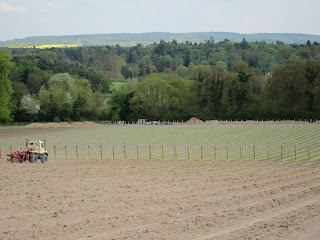 Oblivious to the election results, we were up at 5am yesterday morning to complete the planting of the vineyard. Thanks to Volker Scheu and his satellite guided planting machine, we managed to finish the planting of another 12,600 vines on about 7.5 acres in little more than 24 hours.

The new vines are mainly the traditional champagne varieties including: 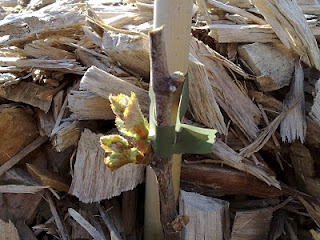 Bud Burst - Pinot Noir
Spring sees the vines awake from their dormant period over winter. As sunshine increases, the buds begin to burst. The majority of our vines at now at the stage of "full swell". Some are at "bud burst" and a few are showing "first leaf".
This is a risky time in the vineyard as a severe frost can burn the buds. At worse this can result in the entire season's crop being lost....

Something from Dr Who? No - Our New Sprayer! 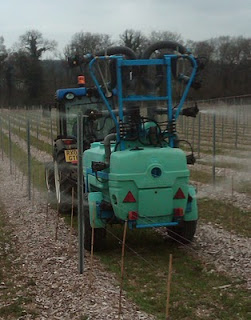 Looking like something from Dr Who, the sprayer for the vineyard arrived last week.

We decided to go for a second hand model (supplied by Nick Seymour) to get some experience of spraying compost teas before investing in a new one. Already we have had some difficulties, with the larger particles in the tea blocking the nozzles but Alex is confident that we will be able to overcome this little...