English Rosé Tasting at the Vineyard 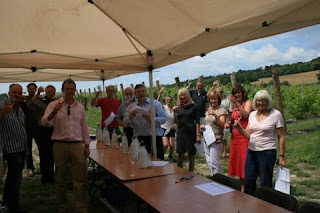 Now that we are nearing our first harvest we need to start thinking about the style of still rosé wine we would like to produce. Hopefully we will get some good quality fruit and we will have something to drink next year.

To help form our views, a group of us met at the vineyard last week to taste some of the best English rosé wines, including samples from Camel Valley, Chapel Down, Hush Heath,...

Engagement at the Vineyard 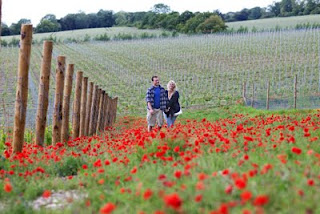 Olivia and Jon get engaged at the vineyard
The vineyard has looked really beautiful recently with a swathe of poppies adding incredible colour to the landscape.

A local wedding photographer, Zoe Collyer phoned me recently requesting access to the vineyard so that she could take some engagement photographs of Olivier and Jon who are getting married this September and of course I was happy to oblige. 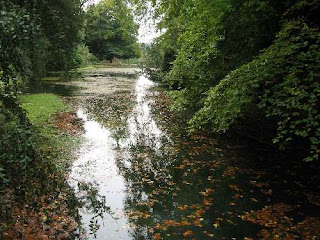 Silent Pool
Now that we are nearing our fist vintage we have to give some thought to the name for the still rosé wine, which will hopefully be available for sale next year. "Silent Pool Rosé" is the current favourite.

The Silent Pool is a lake of crystal clear water adjacent to the vineyard. The water feeding the lake comes from natural springs in the North Down's lower chalk resulting in completely... 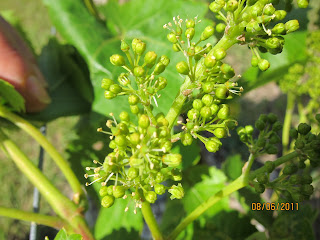 Vines have flower clusters with several individual blossoms that form a closed “cap”. The cap falls off during blossoming and the individual flowers appear. Measurement of the blossoming period begins when about 25% of the caps have fallen off. It can then take 5-10 days for the majority of them to fall off, depending on the weather. This normally happens around Wimbledon fortnight but is a little...

The Vineyard in June 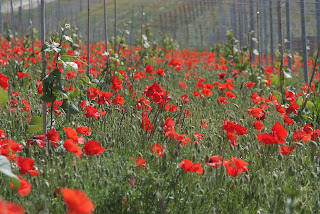 Poppies in the Vineyard (photograph courtesy of John Powell)
The vineyard is looking fabulous at the moment thanks to thousands of poppies which have self seeded in Block B. Unfortunately they won't last for long as Alex is determined to cut them before they seed again in the woodchip mulch!

We are currently busy replacing about 350 young vines that died over the severe winter or were hit by the... 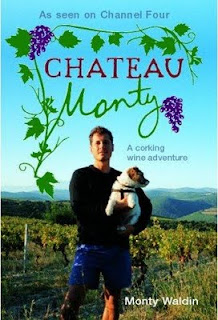 The second Organic and Biodynamic UK Vineyards meeting was held at Laverstoke Park Farm last week. The theme of the day was Biodynamics and Compost Teas and we were lucky enough to have Monty Waldin give a talk on the application of Biodynamics in the vineyard. www.montywaldin.com

Monty explained that Biodynamics is based on organic practices but also uses natural forces (like those provided by the...

Sustainability in the Vineyard 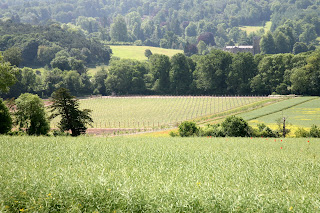 I recently attended a very interesting Wineskills workshop on Sustainability in the Vineyard, facilitated by Professor Steve Wratten -a cockney living in New Zealand! Steve is a leading light in the Greening Waipara project in Lincoln, New Zealand, which aims to build biodiversity back into the wine experience.

Steve poses the question "How can nature help us with agriculture?" Agriculture,...

We have now made a count of dead vines that were planted last May. Overall we had a 2.8% mortality rate, with the Chardonnay faring the worse. The detailed analysis is as follows:

Chilly on the Vineyard 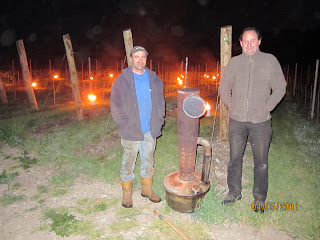 Gary and Philip after lighting the Boujies
I was rudely woken by the weather station alarm txt this morning at precisely 2.51am.... with news that the wet bulb temperature had dropped to 1.3 degrees and that the soil temperature was already below zero.

So it was off to the vineyard in the dead of night to fire up the frost guard machine and to light the orchard burners and boujies. Thankfully Philip... 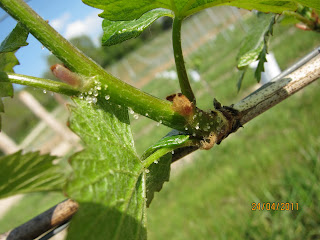 Pearl Glands on a new shoot from a Chardonnay vine
What appear like insect eggs have appeared on the new shoots of the vines, mainly the Chardonnay. In fact these are what are known as Pearl Glands which are tiny balls of vine cells which result from seepage of stomata on the shoots. They often appear on the stems,tendrils, petioles or leaf veins on vigorous vines in warm humid conditions.
Pearl...

Bud Burst and the Dreaded Frost Bud Burst on the 10th April
Bud burst is now occurring throughout the vineyard. We are probably 3-4 weeks ahead of what we might expect as a result of the recent warm weather. On the face of it this is good news but it's also a worry as any frost from now on is likely to cause significant damage to the new growth.

Last night we had our first scare as temperatures at the bottom of the vineyard... 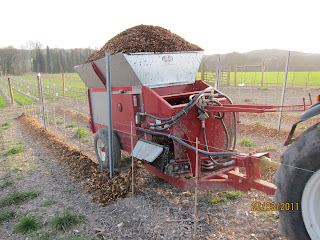 The Mill Creek Compost Spreader
Weeds can be a big problem in organic vineyards as we can't use herbicides to control them. We opted to use woodchip as a mulch which has generally proved to be an excellent solution.

Spreading the woodchip along the rows can be a difficult and time consuming task and so we initially hired a compost spreader from Laverstoke Park Farm to do the job. Initially we...