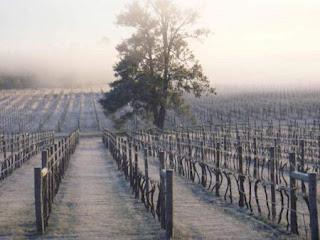 This time of year the major issue for many vineyard managers is frost. As mentioned in previous posts, frost can have a devastating effect on a vineyard, especially in spring after bud break. Last year a nearby large vineyard lost nearly 70% of its crop as a result of exceptional frosts in May!

One of the downsides of global warming is that bud break now often occurs earlier in the year because of warmer temperatures in February and March and the vines are therefore more susceptible to spring frosts in April and May. This year is a good example with our Pinot varieties probably about 3 weeks ahead of where they would normally be. Last year the late frost in May went right the way through the vineyard. It wasn't a disaster for us as we weren't expecting any fruit in 2010, but it was certainly a wake up call.

This year we are experimenting with a number of measures to reduce the risk of frost damage. We are primarily focusing on the first 5 acres we planted in 2009 (Block A) as we hope to get our first harvest from this block later in the year. Our experiences in the next couple of months will help us to develop a plan for the whole vineyard for future years.

So what are we doing? Well first of all we have pruned the vines leaving long canes which we will prune further and tie down after the main risk of frost has gone. Frost damage will occur first at the end of the canes which can later be discarded, hopefully leaving the rest of the cane healthy. We have also left pruning the new blocks until later for the same reason. 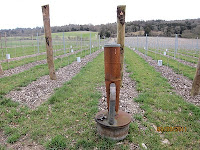 Orchard Burner with Boujies in the rows
We have purchased a static Frost Guard machine which will be placed in the centre of the Block A. This is effectively a outdoor convection heater which warms a radius covering 50% of the block. We also have 20 orchard heaters for the bottom of the vineyard and 180 Boujies (large candles) which are going to be used to protect the outside rows and the corners.

Finally we plan to spray the vines with a valerian solution (biodynamic preparation 507), both before and after a frost. Valerian is a liquid made from the flowers of the herb valerian. It works by stimulating the plant's metabolism, effectively warming it up from the inside.

Valerian
Apart from the pruning process and the Valerian, none of this is very environmentally friendly which bothers me, but hopefully we will only have to use the various burners infrequently. At the end of the day the vineyard has to be economically sustainable.

We now also have a weather station which earlier this week reported a ground temperature  of minus 5C. We have configured it to send us text messages to wake us from our slumber once the temperature gets below 2C. If that happens in a couple of weeks time I will be out on the vineyard with Alex in the middle of the night lighting the orchard burners and the boujies......and praying!
Tweet Share Pin It Add Email