Midlife Crisis and a Vineyard 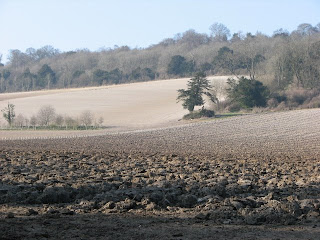 It seems that a midlife crisis is hitting me hard. Not only have I decided to establish a vineyard in the south of England, but for the first time in my life I am entering the world of bloggers!

This blog is purely a selfish attempt to chronicle the multitude of tasks, issues, problems and hopefully some successes associated with setting up an organic vineyard in Surrey. Hopefully it might be of interest to English wine enthusiasts and may even be of some use to others who embark on a similar venture. If this proves to be the case then great - we will see.

The story started about nine months ago when I finally decided that I would try and make my dream of owning a vineyard a reality. I had always assumed that it would have to be in France or elsewhere in Europe but one of the few upsides of global warming has resulted in the south of England being a realistic location for producing quality wine, particularly bubbly. There are already 400 vineyards in the UK selling about 1m bottles annually and this is set to quadruple in size over the next 5 years. Vineyards such as Nyetimber in West Sussex, Chapel Down in Kent and Camel Valley in Cornwall are all producing excellent wines especially of the sparkling variety. Hopefully Albury Vineyard will be added to the list in the future.

Anyway, I've now managed to find what I hope will be just the right site within walking distance of my home village of Albury in Surrey. It's 15 acres on the southern slopes of the North Downs in the Surrey Hills Area of Outstanding Natural Beauty. The location was chosen because it is below 100m above sea level, is well sheltered and is south westerly facing. The soil is also clay on chalk which is the same as the region of Champagne. The plan is to plant the first five acres this May with the classical Champagne varieties of Chardonnay, Pinot Noir and Pinot Meunier. If were lucky we will have our first harvest in October 2011. Unfortunately that's only the start of the process, which will take at least another 3 years before "Albury bubbly" hits the shelves! Establishing a vineyard is certainly not a short term investment; it's probably a good 12 years before you get a financial return!

Luckily, I won't be relying entirely on myself to ensure the success of this venture. I've managed to secure the consultancy services of one the top experts in UK viticulture, Stephen Skelton MW. Without someone like Stephen it would be complete madness to embark on such a venture. He has already been invaluable in helping me plan the project and his many contacts have enabled us to get all the basic building blocks in place. the only advice I've not taken from Stephen is not to go organic which I'm told is a nightmare when it comes to weed control. However I'm determined to give it a go - time will tell which one of us proves to be right. I'm also lucky to have come across John Buchan who is an agronomist specialising in organic vineyards (I still can't believe that such a beast exists in the UK).

In the next few months I will be busy preparing the land, planting windbreaks, erecting deer and rabbit fencing, planting the vines and putting up the trellising. Hopefully there will be a bit of time to post some blogs!