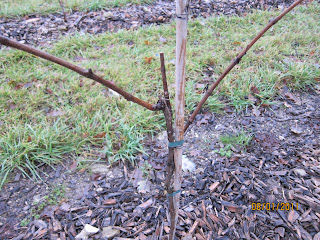 Pruning is the main task in the vineyard during winter. This can begin once the leaves have dropped and therefore normally starts in late November and continues through to February.

There are many methods for pruning and training vines which is normally determined according to the climate and the variety of grape being grown. Different systems can help to increase exposure of the foliage to light, improve air movement through the leaf canopy (and therefore reduce the risk of mildew and botrytis) and control vigorous vines that produce too much foliage and not enough fruit. This is all part of canopy management, which refers to how the architecture of the leaf canopy can be manipulated in order to beneficially alter the microclimate around the vine.

In the UK the training system mostly used is cane pruning where the vine is pruned back each year to the trunk, leaving just one or two canes from the previous year, which then produce many more fruiting canes during the growing season. A spur from the trunk is also left (cut back to two buds) to produce new replacement canes for the following year. This is also known as the "Double Guyot" system. In the photograph above the canes have been left intentionally long until after the risk of frost in the Spring as buds will form at the end of the canes first. Once the risk as gone these will be cut back to 5 or 6 buds.

The new vines that were planted last May will be pruned back to just two buds above the graft to encourage root growth and produce a strong new shoot which will form the basis of the trunk for the following year.