Botrytis - not Noble in the UK 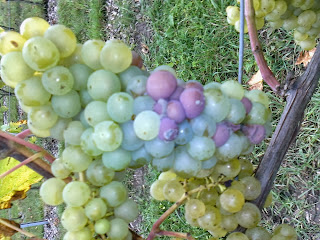 The recent damp weather has resulted in Botrytis on some of the fruit. It's not too bad at the moment, and is mainly restricted to the Seyval, but the later we leave picking the more it will spread. As a rough rule of thumb the level of infection normally doubles every week.

Botrytis, or bunch rot as it is know in viticulture, is a fungus that attacks the fruit as it begins to ripen. It thrives in high humidity and still overcast weather. Fruit that has been damaged by insects or birds is particularly susceptible. In some warmer countries, where drier afternoons follow damp early mornings, Botrytis remains dry and can result in "nobel rot" which is used to produce excellent sweet wines like Sauternes or the Aszu of Tokaji. No such luck in the UK!

As we don't use systemic chemicals, we try and prevent Botrytis by thinning the canopy during the summer (to allow air flow) and also use a bacillus (Serenade) which can reduce early infections. Some botrytis is acceptable in the winery but if it's more than 5-10% it can be a real problem especially for sparkling wine production.

We've been cutting off some infected fruit earlier this week. Hopefully we will be able to pick soon but as sugars are still on the low side and acids a bit high it might be a couple of weeks before the harvest.