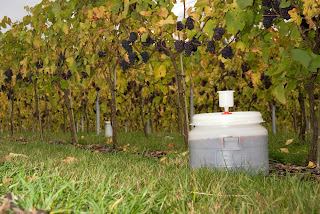 Earlier today we prepared a Pied de Cuve, which is maybe the first time it has ever been made in the UK.

The purpose of a Pied de Cuve is to cultivate the yeasts on the skins of the grapes, so that these naturally occurring yeasts can be used to ferment the wine, rather than a commercial yeast that would normally be added in the winery. Yeasts have their own flavour characteristics and by using yeast from the vineyard we will hopefully produce a wine that has a greater sense of place or terroir. Biodynamic wine can only be produced with naturally occurring yeasts, which is also a requirement of the Natural Wine movement. 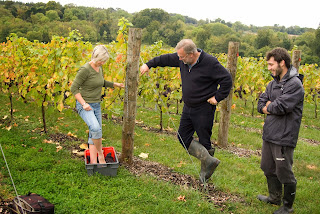 To produce a Pied de Cuve some grapes are picked about a week before the harvest is due to take place. They are then crushed by foot (Alex a somewhat less than willing volunteer!) and the whole mix is then put into fermentation bin so that the yeasts on the skins come into contact with the juice.

Hopefully it will start fermenting in a few days time and we will then have to monitor the growth of the yeasts. The resultant Pied de Cuve will be used to kick start the fermentation process for a larger batch of wine.

It's a bit of an experiment this year as its too risky to use this process for the whole production. However, if it works it will be fascinating to taste the difference between the biodynamic and organic Silent Pool Rosés made from exactly the same juice.